"Brennans cartoons of robed judges, lawyers and legal professionals have kept the industry amused for years". 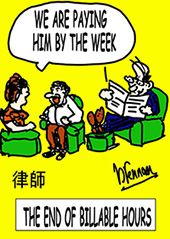 In 1987 in Sydney I started drawing cartoons.  I was first published in Hong Kong in 1992.  I only draw legal cartoons. I have had cartoons published in various publications including the Australian Financial Review and the Hong Kong Tatler. I have published several books which include my cartoons.

The main character is called John Fytit (pronounced “Fight it”) and has a passing physical resemblance to my principal during articles, who became a Judge.

I tell you this as I want to make it clear that the John Fytit character is not me. After asking me, "Who draws the cartoons?" this tends to be the second question that I am asked.